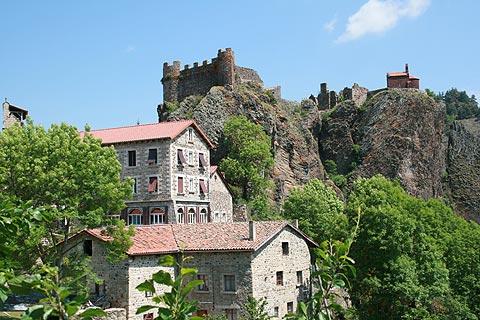 Arlempdes village is 27 kilometres south of Le Puy-en-Velay, in the Haute-Loire department of the Auvergne region. It is classified among the 'most beautiful villages of France'.

Your first glimpse of Arlempdes will take your breath away - the ruined castle on a rocky outcrop, and the beautiful valley below combine to make a very lovely view. You can enter the village through the 11th century stone gateway that was once part of the defensive walls around the castle, and called the poterne. 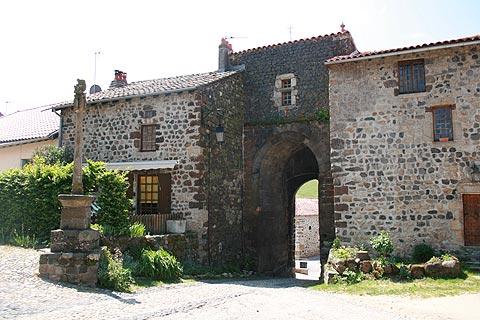 Arlempdes itself is very small, and becoming increasingly prettified / renovated in recent years, and is now largely dependent on tourism for its income. It won't take you long to explore - try and arrive around lunchtime so you have an excuse to have lunch in the restaurant at the entrance to the village, or have a picnic in the valley below.

- the chateau, which is open for guided visits in the summer. Sitting on the cliff above the small village, the 12th century chateau is now a ruin. It is especially worth visiting for the fine panoramic views it provides;

- the magnificent setting on a rocky outcrop over the upper reaches of the Loire River (the source of the river is just 30 km further).

The little chapel and the Roman style church in the village also merit a visit. The church of Saint-Pierre was built in the roman style in the 12th century and retains its entrance with four stone columns as well as an unusual belltower with a series of arches each containing one bell.

Take a look at the cross just in front of the church: this dates from the 15th century and has carvings of the crucifixion and a piéta on the cross.

The village is also gaining a reputation for the theatrical events that are held in the courtyard of the chateau for a week each summer - the 'Festival de théâtre d'Arlempdes'. 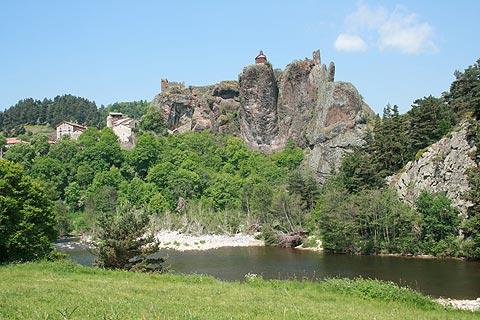 The countryside around the village is very attractive, with volcanic rock appearing dramatically from the landscape of valleys, streams and rivers. There are many villages of interest to see near Arlempdes, with Pradelles to the south being one of our favourites.

I must also emphasise that the town of Le Puy-en-Velay, north of Arlempdes, is one of the most interesting towns in central France and a visit is highly recommended.

Map of Arlempdes and places nearby

Visit near Arlempdes with France This Way reviews

Plan your visit to Arlempdes, Haute-Loire

The French version of this page is at Arlempdes (Francais)