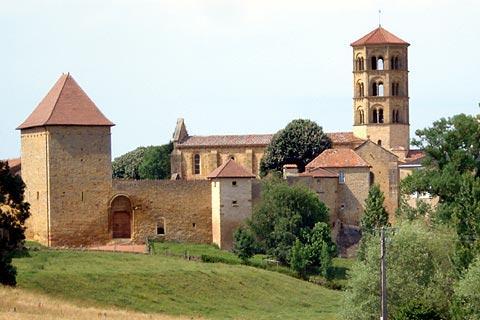 Anzy-le-Duc is in southern Burgundy, to the south of Paray-le-Monial. A small, pretty village with some lovely traditional houses that is set peacefully in the rolling Burgundy countryside, the principal attraction here is the Priory of Anzy-le-Duc.

History of the Priory of Anzy-le-Duc

A monastery was first founded here in the ninth century, and gained fame because Hugues de Poitiers, an inspirational character at that time, became a prior at the church. Hugues de Poitiers went on to be a founder of the famous abbey at Cluny.

The relics of Hugues de Poitiers were kept in the church at Anzy-le-Duc after his death and attracted so many pilgrims to the church that a decision was made to replace the original church with a larger version. The current church was built to replace the original building in the 11th - 12th centuries although the crypt from the earlier church was retained and can still be seen today.

The building was damaged and abandoned during the 16th - 18th centuries, in particular during the Wars of Religion, but found a new life from the 19th century onwards when it was repaired and started to be used as the local village church. 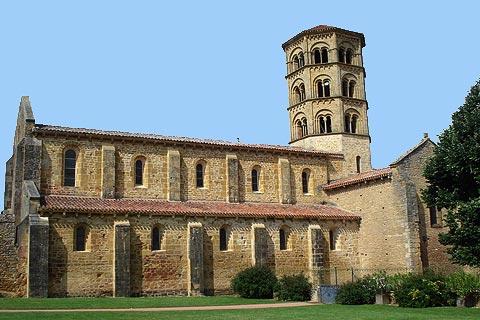 Visit the priory of Anzy-le-Duc

The church and village of Anzy-le-Duc are perhaps best described as 'small but perfectly formed' and a visit is recommended when you are in the region.

The church is well known as a good example of Burgundy Roman style church architecture and has several notable highlights dating from that period. In particular the carvings around two of the doorways and the capital stones inside the church are impressive examples of roman style workmanship.

Although the church is the principal part of the priory of Anzy-le-Duc that can still be seen today, some of the other priory buildings can also be seen adjacent to the church.

Inside the church is also distinguished by the beautiful decoration and vibrant frescoes it contains, especially in the choir area, and by further stone carvings such as the capitals at the top of the columns are carved into statues of people, plants and animals representing Biblical stories.

Beneath the choir of the church at Anzy-le-Duc there is an 11th century crypt, which for several centuries held the relics of Hugues de Poitiers. The crypt somehow became forgotten, then later used as a storage area, but has recently become reincorporated in the church and can now be seen during a visit. 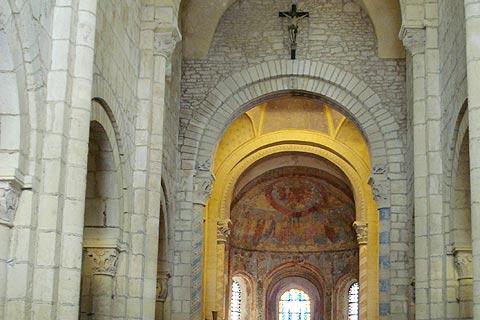 Note: during summer months nocturnal visits to the church are often arranged, giving a rare and welcome chance to better recapture the history of the priory.

Enthusiasts of roman and religious style architecture will want to also visit the church at Semur-en-Brionnais and the Abbey at Cluny while in this part of Burgundy. We also suggest a stroll around the village of Marcigny a few kilometres south of here.

Map of Anzy-le-Duc and places nearby

Visit near Anzy-le-Duc with France This Way reviews