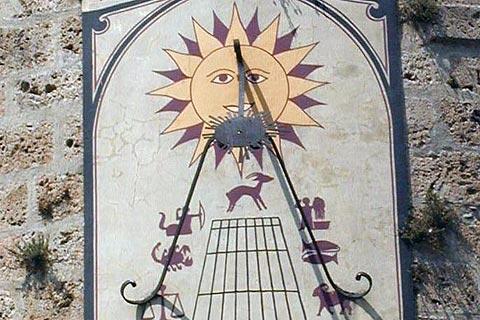 The town of Anduze is south of Ales in the Gard department of the Massif central, Languedoc-Roussillon, next to the River Gardon d'Anduze.

Anduze is a picturesque town, with narrow streets lined with medieval houses opening onto open squares, and various highlights to be enjoyed. 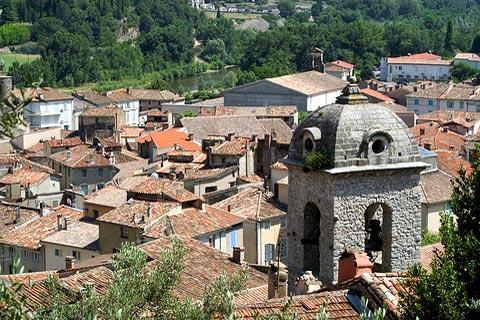 The clocktower, dating from 1320 and part of the original defensive ramparts of the town can still be seen (the ramparts themselves have since been destroyed) as can the original grain hall dating from the 15th century. The hall is best appreciated on a thursday morning, which is market day in Anduze.

There is also a curious pagoda-fountain dating from the 17th century, and covered with brightly coloured tiles. Elsewhere in Anduze you will notice several other fountains as you explore.

Other highlights include the 19th century protestant temple which is one of the largest temples in France and in a rather austere neo-classical style and the Church of Saint Etienne.

The temple was built to replace a 16th century temple in Anduze which is thought to have been the first protestant temple in France until the protestants were driven out in 1685, and the Church of Saint-Etienne was built on the site of the original temple. The history of the town is deeply interlinked with the story of protestants in the region, above all from the Wars of Religion, and this history is commemorated in the Musee du Désert in the nearby village of Le Mas Soubeyran.

After seeing the sights in Anduze itself take a stroll along the picturesque Rue Droite (leaves from the market square), then a relaxing visit to the attractive gardens at the Cordeliers Parc is recommended, especially if it is a sunny day. 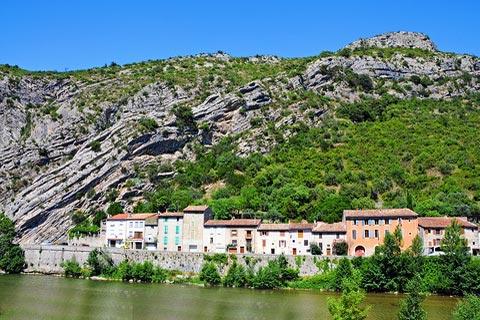 Other villages near Anduze worth visiting include Saint-Hippolyte-du-Fort, to the south in the Languedoc Plains, Sauve and Lassalle, as well as several other small villages and hamlets. The bamboo garden at Prafrance is close by and worth a visit, and a little further north the caves at Grotte de Trabuc are a great way to escape the heat of the day.

Anduze is also on a popular tourist train line with a steam train that links the town to the Prafrance Bamboo Garden and to Saint-Jean-du-Gard, well known for its association with Robert Louis Stephenson. The journey takes just under an hour and is an excellent way to appreciate the countryside (operates from Easter to the end of October).

Anduze is also well placed for exploring the southern part of the Parc National de Cevennes, a very scenic region of forested hills, cliffs and river valleys, and open moorland.

Map of Anduze and places nearby

Visit near Anduze with France This Way reviews

Plan your visit to Anduze, Gard

Regular market(s) are held in Anduze each Thursday. (Markets are held in the morning unless stated.)

The French version of this page is at Anduze (Francais)