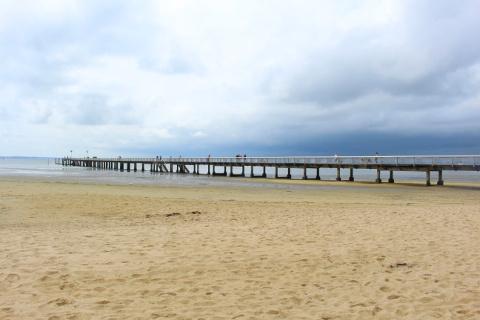 Andernos-les-Bains is a pleasant seaside town which happens to have the longest pier in France. The pier was built in 1926 and is 232 metres long. From it you get good views back over Andernos and also round to Cap Ferret and its lighthouse and over to Arcachon.

At high tide all but a small portion of beach is in the water but at low tide the water recedes a long way and the beach becomes a large area of sand and pools and much of the pier is out of the water. 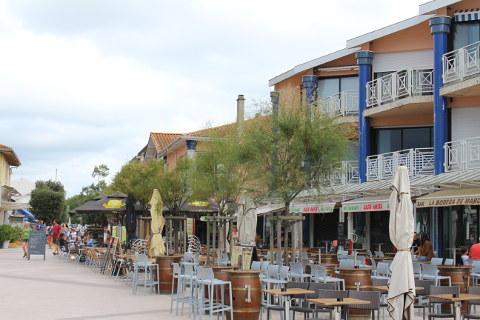 The centre of Andernos-les-Bains does not have the beauty of Arcachon nor the charm of Cap Ferret but it is worth a stop if you are exploring the Bassin d'Arcachon. There are two pedestrianised streets that lead to the large square next to the jetty, and you can find a good selection of shops, bars and cafes.

On the edge of the town and still virtually on the waterfront is the church. The church of Saint Eloi is a Romanesque church of the 11th century. It is built on the remains of a Gallo-Roman villa from the end of the 4th century and these can be seen in the church grounds. Inside the church be sure to admire the 15th and 17th century murals.

Objects found during the excavation of the Gallo-Roman villa can be seen in the Museum of Andernos-les-Bains along with prehistoric remains found locally. The museum is housed in the imposing "Maison Louis David" which is a large villa built in 1895 surrounded by a pleasant park.

Continue walking beyond the church and you will reach the oyster village of Andernos-les-Bains.  Oysters have been harvested in the Bassin d'Arcachon for generations and are reknowned for their quality throughout France. If you like or want to try oysters this is where to come. There is also a small oyster museum you can visit.

The local oyster industry has weathered various setbacks due to incidences of pollution but since 2000 has been thriving. The oyster ports around the bassin (ports ostréicoles) are a pleasure to visit even if you don't eat oysters as the tiny cabins set around inlets of water are often painted pretty colours and with the oyster boats present a charming picture.

Andernos has a fete in the cabins each winter in early December where tapas, oysters and the white wine of the region are sampled followed by a firework display in the evening. A good time to visit if you happen to be here in winter.

If you walk west from the centre of Andernos-les-Bains you reach the Port de Plaisance, a small fishing port and where we spotted a beautiful, and huge, 19th century villa! 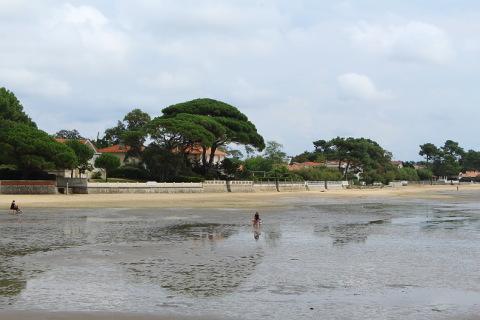 A little further around the bay you can visit two of the prettiest oyster villages of the Bassin, Canon and L'Herbe. These quaint oyster villages have tiny cabins packed cheek to jowl on the edge of the sea. Painted an array of colours they are wonderful and a couple of bars and restaurants allow you to stay and savour the atmoshphere.

Further round the Bassin d'Arcachon you can enjoy views over the lagoon at Cap Ferret or set off for one of the ocean beaches. In the other direction don't miss a trip to Arcachon and its fabulous villas.

Map of Andernos-les-Bains and places nearby

Visit near Andernos-les-Bains with France This Way reviews

Plan your visit to Andernos-les-Bains, Gironde

Regular market(s) are held in Andernos-les-Bains each Tuesday & Friday &. (Markets are held in the morning unless stated.)