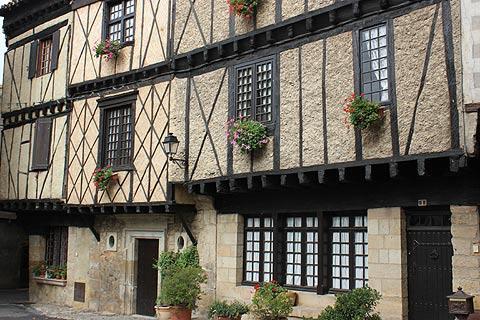 Alet-les-Bains is a small town in the Aude countryside to the south of Carcassonne and a few kilometres south-east of Limoux, well known for its ruined abbey and for the spa water that comes from the town.

The town itself is quite small but has several interesting highlights and is a pleasure to visit when you are exploring the Aude. The centre of Alet-les-Bains is focussed around a small square that contains a statue, several arcaded buildings, and some very attractive half-timbered houses. 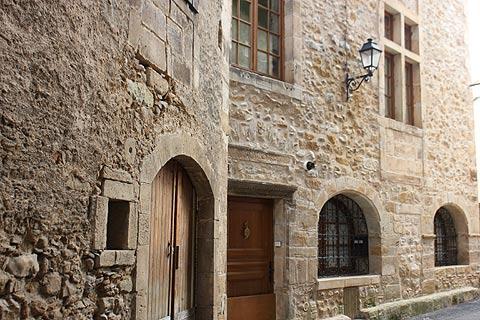 From this square there are various streets that radiate in all directions - be sure to explore along them because there are some lovely houses in the streets, and also various interesting architectural highlights such as ornately carved stone doorways.

At the eastern end of the town you pass through one of the original stone gateways through the fortifications, beyond which you can see a substantial section of these walls. To the northern edge of Alet-les-Bains there is a bridge with views along the Aude river in both directions.

Just on the edge of the main town centre there are a ruined abbey and a church separated by a cemetery, which are the main historical highlights in Alet-les-Bains: entrance to Alet-les-Bains abbey is via the adjacent Tourist Office..

The abbey and church in Alet-les-Bains

The abbey is thought to date back to the 9th century and became a cathedral in the 12th century, and there are sufficient ruins to evoke the spirit of the original buildings.

Founded in 813 by the Count of Razes, the abbey originally contained a fragment of the true cross. During the following centuries the abbey suffered many conflicts with other abbeys in the region, but by the 12th century Alet-les-Bains had established itself as an important local abbey which brought wealth to the town, which was in part used to pay for the defensive walls.

This period of prosperity calm to an end with the wars of Religion in the 16th century - the abbey and town were defeated by the protestants in 1575 then recaptured by the  catholics in 1588. At the end of the 17th century part of the land which included the church chevet was sold so that a new road could be built, and the revolution led to a further decline in the fortunes of the abbey.

Significant parts that remain of the principal original buildings include the nave, apse and a small part of the choir. Around the nave you can see two towers (the clocktower of Saint Michael and the clocktower of Our Lady), a romanesque style doorway and the romanesque design of the west end of the nave.

There are also lots of smaller highlights such as gargoyles and the remains of carved capital stones. 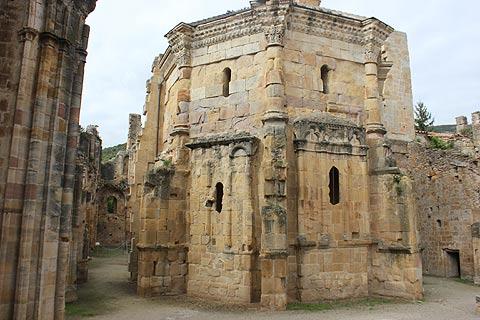 The Church of Saint-André is largely a 19th century reconstruction of the original, but inside you can see some 14th century frescoes in a chapel to the left, and the small treasury to the right also has some interesting artefacts such as a 12th century wooden statue of the Virgin and child.

Alet-les-Bains has been known for its thermal spa waters for 2000 years, since the time of a Roman settlement here, and the waters are still bottled and sold commercially. The spa centre is open to visitors in the summer, and there is also a swimming pool that is popular with visitors that is filled with the natural spring waters.

At the southern entrance to Alet-les-Bains you will see a route that leads to a picturesque hamlet called Saint Sylvester that we recommend for the views across the region. There is also a casino at this end of Alet-les-Bains.

The surrounding countryside is also very picturesque - we particularly recommend the route to the east of the town that leads to the view across to the ruined castle at Belcastel-en-Buc and continues to the abbey at Saint-Hilaire - quite a long winding country road that passes through a great deal of scenic countryside.

Map of Alet-les-Bains and places nearby

Visit near Alet-les-Bains with France This Way reviews

Plan your visit to Alet-les-Bains, Aude