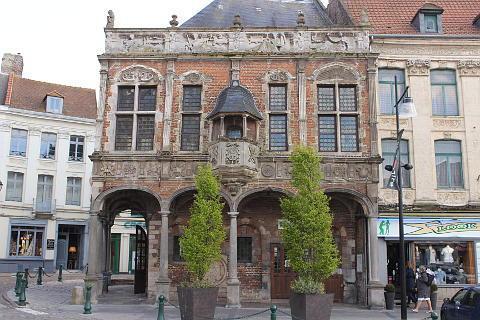 Aire-sur-la-Lys is a town in the Pas-de-Calais department of northern France, to the south-east of Saint-Omer and east of Boulogne-sur-Mer. The town is officially listed among the 100 'most beautiful detours' in France.

Start your visit at Aire-sur-la-Lys tourist office, situated in the main square in the town (la Grand Place). The Grand Place is unusual in France for being triangular rather than square or rectangular. In order to provide some unity to the square, in 1722 the town magistrate restricted the size of the square and demanded that facades be adorned with decorative pilasters. Look out for these attractive features as you wander round. 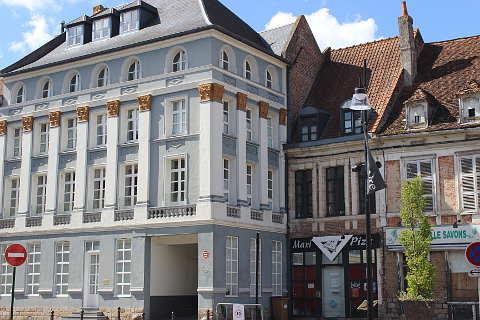 As is often the case in France the tourist office in Aire-sur-la-Lys is housed in the most attractive building - the 'bailliage'. While you are here ask for a plan of Aire-sur-la-Lys, because there are a good number of interesting sights to be seen in the town.

The bailliage is a remarkable building built of brick and stone in 1600. The ornately decorated renaissance style building has arcades around the ground floor, separated by narrow columns, ornate stone surrounds to the windows, and decorative friezes running around the outside. Many of the friezes were inspired by the Italian Renaissance. It was originally built as a guard house of the town militia and also served as the bailiffs court - hence the name.

Dominating the Grand Place is the Town Hall, dating from the early 18th century. It has an attractive facade in the neo-classical style with numerous pilasters (embedded columns used for decorative rather than structural purposes) and a balustrade with many interesting carvings.

Behind the town hall you can see the belfry, 45 metres tall and historically a clocktower and watchtower. It was built in 1715 (as part of a rebuilding of the Town Hall) on the site of an earlier tower that had been destroyed by the wars that ravaged the region in the early 18th century. The belfry is listed as one of more than 50 across northern france and Belgium that have together been listed by UNESCO as a site of world heritage.

The other key building in the town is the Collegiale Church of Saint Peter, much damaged and rebuilt (to the original design) over the 400 years since its construction. It is a large building in the gothic-flamboyant style and most notable for the square tower and the interior with its columns lining the nave, a 17th century organ, and various other statues and decorative highlights in several of the chapels.

Also in the centre of Aire-sur-la-Lys is the ornate baroque style Jesuit Chapel of Saint-Jacques. This was the chapel to the Jesuit College.

The Jesuits were dedicated to education and set up colleges in Douai, Cambrai, Saint-Omer and Aire-sur-la-Lys. The Jesuit order was suppressed in 1761 and the chapel in Aire was taken over by the town. For a while the army stored explosives and animal fodder in the chapel. Eventually it was reinstated as a church. 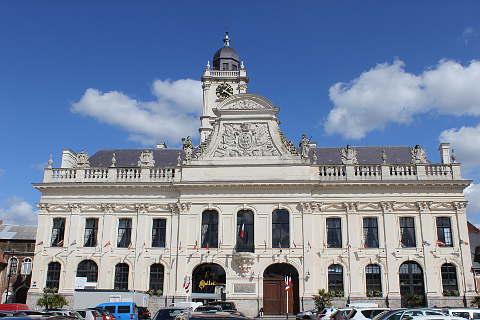 On the river you will find the unusual tall and narrow Beaudelle chapel which is the main part remaining of the 19th century Beaudelle Hospice. The tiny rivers of Lys and Lacquette both run through the town and offer attractive views including that of the moulin on Rue du Fresne. Various water-based events happen throughout the year including the Festival of the Lys on the first Sunday of July which has musical and sports events.

The town of Saint-Omer is also worth a visit, and although it is about 50 kilometres east of Aire-sur-la-Lys we also recommend you visit Lille when you are in this region.

Map of Aire-sur-la-Lys and places nearby

Visit near Aire-sur-la-Lys with France This Way reviews

Plan your visit to Aire-sur-la-Lys, Pas-de-Calais

Regular market(s) are held in Aire-sur-la-Lys each Friday. (Markets are held in the morning unless stated.)