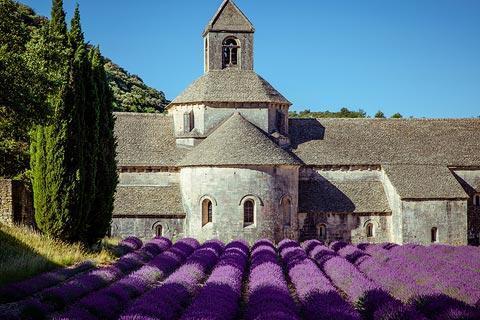 The Abbey of Senanque is in the Vaucluse department a few kilometres north of Gordes, one of the prettiest villages in Provence. It is perhaps the famous views of the abbey surrounded by lavender fields that have spread the reputation of Senanque Abbey and attract visitors from all over the world, rather than the chance to enjoy a visit to a beautifully preserved abbey, still occupied by monks...

Discover the Abbey of Senanque

France This Way comment: the experience of a visit to Senanque abbey varies a great deal according to the time of year, with large crowds in the summer attracted by the view of the abbey across the lavender fields, and a much quieter experience in the spring and autumn, more appropriate to a working abbey but with no lovely lavender to see!

To see the abbey with the famous rows of purple lavender in front looking their best you will need to try and visit towards the end of June or in the first half of July. The flowers will probably remain a while after this but will look a bit faded. I have visited Senanque Abbey more than once and should say that even as late as the end of May the lavender fields can look very rough and full of weeds, which does detract substantially from a visit. 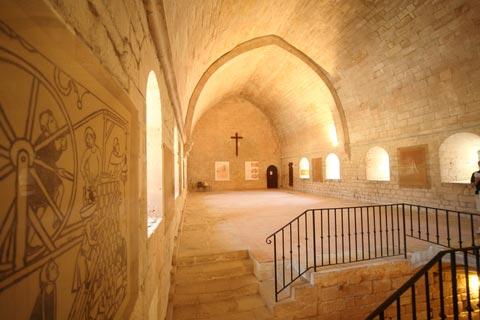 The Abbey of Senanque was built in the Sénancole valley in the 12th century as a cistercian monastery and has largely retained its architecture from that time, so it is a fascinating chance to see a roman style monastery that is still in use for religious purposes.

The abbey was a rich and powerful centre for the region until the 16th century and the Wars of Religion, during which the abbey was burned and many of the monks killed. After the revolution monasteries were banned and the building was sold. By the middle of the 19th century some new buildings had been added and monks were once again living here. In 1903 monks were again ejected from the abbey but since 1926 there has always been a small community of monks here and there are currently about 11 cistercian monks who live on the premises.

Many of the original monastic buildings have now been faithfully restored and when you visit the Abbey of Sénanque you will see several of these, including the abbey church, the original dormitory, the cloisters and the chapter house. The cloisters are particularly interesting with their acaded galleries, stonework and ornamental gardens.

Note that there are no decorative elements in the church because these might distract the monks from their worship, and only one room is heated - a small room with a vaulted roof called the calefactory (the warming room), where the monks work.

It is easy to reach Senanque abbey from Gordes, but you should be aware that because the road is rather narrow and on the edge of a cliff it now includes a one-way section. So when you leave the abbey you can not return directly to Gordes the way you came, but must take a much longer route instead - so about four kilometres to get there and ten kilometres to get back.

Please do not climb over the fences and trample all over the lavender as some visitors do, we all want a nice photo for instagram but we don't want to destroy it in the process. I understand that recently the abbey have started putting ugly fences around the fields to stop their lavender being trampled by enthusiastic photographers!

Visits to the abbey complex are rather complicated to explain, in part because it is still a working monastery. Generally speaking you can visit in the morning with a printed guide (available in several languages) or in the afternoon only as part of a guided tour which will always be in French and only accepts a maximum of 50 people. There are also certain times of day, mostly early morning and early evening, when you will hear the monks chanting. I suggest you see their website at www.senanque.fr for detailed information.

It is free to visit the church, and 7.50 euros if you want to see the other buildings. There is a shop on the premises selling various local and lavender based products, some produced by the monks who live in the Abbey of Senanque. 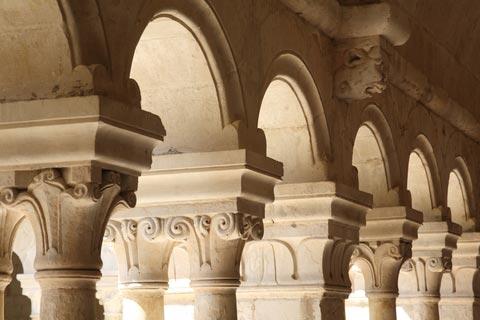 Any visitor to Senanque Abbey will also want to spend time exploring Gordes, one of the most beautiful villages in France. The other important attraction near Gordes is the Village des Bories, an entire restored village of traditional small stone huts a few kilometres west of Gordes.

Photos of Abbey of Senanque

Map of Abbey of Senanque and places nearby

Visit near Abbey of Senanque with France This Way reviews

Plan your visit to Abbey of Senanque, Vaucluse