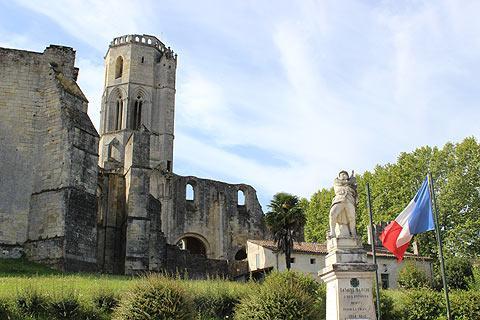 Set on a small hill above the village of La Sauve, in the heart of the vineyards of the western Gironde to the south-east of Bordeaux, the Abbey of La Sauve-Majeure is in ruins - but the ruins are quite substantial and there are several particularly interesting examples of the local roman style architecture to be seen.

The abbey is now listed as a UNESCO world heritage site, being one of the important historic monuments on the pilgrimage route to Santiago de Compostela, and an important starting point for pilgrims from this region. It is also a French National Monument.

A brief history of the Abbey of La Sauve-Majeure

The abbey, in the village of La Sauve, was originally founded in 1079. It rapidly grew to become an important local centre with up to 300 monks living here.

By the 13th century the abbey had reached the height of its powers and controlled extensive areas of land, and Eleanor of Aquitaine was a regular visitor.

The great wealth of the abbey also attracted many enemies both from Spain (the Basques and the Navarres) as well as from the nobles of the local area, and the abbey was attacked on many occasions. After the end of the ravages of the Hundred Years War the abbey was largely rebuilt and fortified but it was never to regain its previous importance, and the decline in the fortunes of the Abbey of La Sauve-Majeure was to continue in the following centuries.

A great storm caused important damage in 1665 and then an earthquake in 1759 caused damage to the abbey church. The French Revolution in 1793 saw the end of monastic life in the abbey and the church assets were confiscated, as with all abbeys in France, although it then gained a use as a prison. The church roof collapsed in 1809, and from that time on the abbey served only as a source of stone for the building of houses in La Sauve village.

The abbey did gain use as a school from 1837 until 1910 when it was destroyed by fire, and as a military hospital during the First World War. It was only after 1960 that the Abbey was finally protected and work carried out to prevent further damage. It is now a National Monument open to the public.

Highlights of a visit

There are two main aspects to a visit, one being a general tour to gain a sense of the original layout of the abbey and the other being a chance to look at the examples of roman style architecture.

The church tower is still standing, as are substantial parts of the church itself such as the chevet and choir areas. Various roman style stone windows can also be seen, and part of the dome of the nave is still intact. There are nice views across the church and village from the top of the tower.

The roman architecture is best seen by looking at the sculptures of the carved capital stones of the columns in the abbey, in particular in the apse. There are numerous of these carvings to be seen, at least 25 of them, and mostly representing Biblical scenes and animals, real or imaginary.

The entrance price to the Abbey of La Sauve-Majeure is 7.50 euros, which I though was a bit expensive given the limited amount of ruins but perhaps I am just mean!

Map of Abbey of La Sauve-Majeure and places nearby

Plan your visit to Abbey of La Sauve-Majeure, Gironde