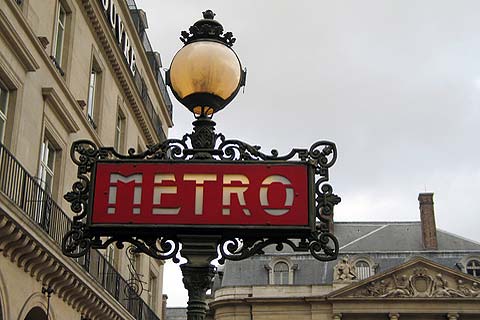 The Paris Metro (full name 'métropolitain parisien') opened on the 19th July 1900, at first having just one line between Porte de Vincennes and Porte Maillot. This original line has subsequently been extended and now operates between Château de Vincennes and La Défense - it is Line 1 on the modern underground system.

The system itself was designed by a gentleman with the impressive name of Fulgence Bienvenüe - a fine achievement, if slightly overshadowed by the city's choice of architect for the station entrances.

In a moments inspiration the authorities appointed architect Hector Guimard, leading Art Nouveau architect, to design the entrances to the stations, and not only have these stood the test of time, but the original entrances to the metro stations are now an attraction in themselves in Paris. 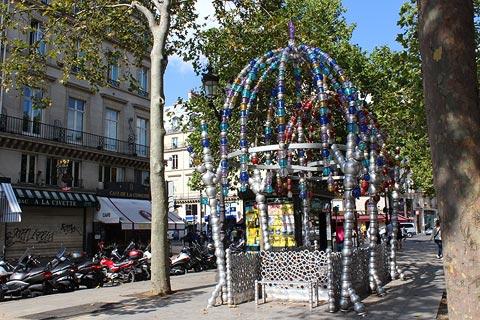 There are now more than 200 kilometres of lines and nearly 400 stations covering the the city centre. (The suburbs are covered by the RER train system, which has many interchange-stations with the metro system).

Although the centre of Paris is quite compact and can be explored on foot, there might be occasions when you need to take the metro: the Eiffel Tower and Montmartre are both outside the very centre of Paris, for example. Even if not it is worth taking a journey or two (outside rush-hour) simply for the pleasure of trying it and seeing a couple of the stations. Abbesses on Line 12 is a good example, with a well decorated interior exiting to one of the original Guimard art nouveau entrances.

It is also very easy to use, with the train lines being numbered and the platform signs referring to the line number and the final destination of the line (rather than north, south etc). So as long as you have a map of the underground (which your hotel or nearest train station can give you) you can't really go far wrong.

On the downside, the Paris Metro is the only place I can remember that we have ever had something stolen from a bag. Same risks as every busy city in the world, so be sensible and keep your bag in front of you and there won't be a problem.

(We lost all our money and credit cards from a handbag that was left open, so we had to carry our suitcases from the hotel to the train station the next day. Someone else we know had their bag over their shoulder - the side was cut out of their bag and the contents stolen without them noticing a thing!) Need for usual vigilance aside, the metro in Paris is easy, quick and reasonably cheap to use.

See our Paris Breaks section to plan your Paris visit.