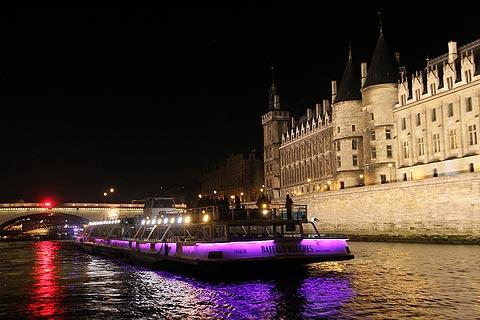 One of the most popular trips taken in Paris is the tour boats that carry visitors along the Seine River. These boats, called the Bateaux Mouches, provide a lovely way to enjoy the scenery of this beautiful city, a bit of tranquility in what can be a tiring city to explore, and a chance to see many of the famous monuments from a different vantage point.

The Seine passes right through the heart of Paris, and many of the most well known monuments are close to the river. Among the sights that you will see from your 'bateau mouche' are the Eiffel tower, Notre-Dame Cathedral, and the Louvre.

The boats used for your River Seine cruise are large, flat bottomed craft that hold up to 300 people or more, and have an open top and (sometimes) an enclosed lower level. The upper level usually has a glass canopy. Although the boat trips are very popular there are a lot of them operating - sometimes the river seems quite crowded with them! - so queues to get on a bateau mouche are not usually too long and you won't need to reserve tickets before your visit. 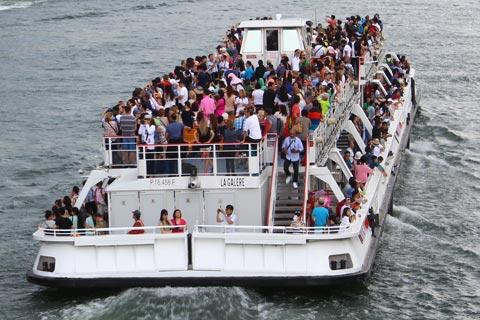 Note that 300 people is quite a lot on one boat and while there is plenty of room for everyone on a bateau mouche, you might find yourself in the middle of the boat three or four rows away from the edge - you can still usually see everything with no particular problem but might prefer to sit or stand at the edge of the boat so will want to be nearer the front of the queue to get on!

You should also be aware that there are high embankments along most of the Seine in the heart of Paris which substantially reduce the view you have of the famous monuments.

Most Seine cruises will include a commentary to point out the highlights to you, typically in several languages, and last an hour or so, and the normal trip costs about 10 euros for adults and 5 euros for children. Another popular option is to take the trip during the evening - the perspective you get of Paris is very different at night when many buildings are illuminated.

If you are feeling extravagant you can also take the bateau mouche trip including lunch or dinner.

There are several embarkation points for the boats along the river, the most popular being those near the Eiffel Tower and Notre Dame de Paris.

History of the name bateau mouche

Note the word 'mouche' doesn't come from 'fly' (the literal translation of mouche). It probably comes from the region in Lyon where the first of these boats came from, although the more romantic notion is that the name comes from 'spy boat' with mouche (fly) being a slang word for spy. 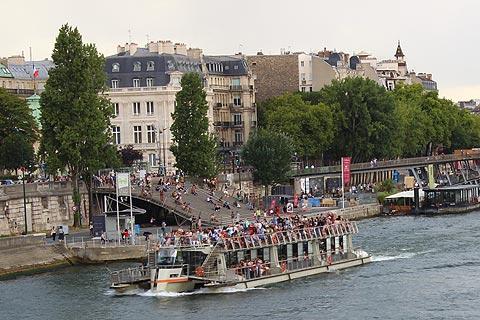 The company that originally launched the popular river cruises 50 years ago, called 'Compagnie des Bateaux Mouches', is still going strong - although there are now numerous competitors offering a similar trip along the Seine. Inevitably, all are going to pass the same Parisian monuments.