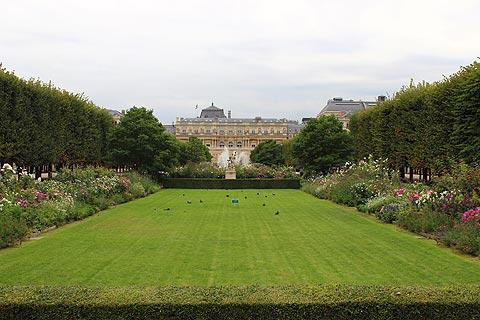 The Palais-Royal and its associated gardens is a rather overlooked palace just a short distance north of the Louvre and at the southern end of the road that leads to the Opera. Although it doesn't take long to explore it is actually a lovely place and also a tranquil escape from the crowds nearby, and free to enter, so certainly well worth a visit

History of the Palais-Royal (Royal Palace)

The Royal-Palace was originally built in 1636 by Cardinal Richelieu - so it is not surprising to learn it was at that time called the Palais-Cardinal. Richelieu bequeathed the palace to the King in his will, so it became Royal in 1642. Over the following decades it became a centre for meetings of the Royal court.

The palace was later extended to include the columned area behind the main palace, which was used for shops and subsequently became something of an area of ill-repute. This continued until King Louis-Philippe came to the throne in 1830 and decided to close the shops because of their bad reputation. 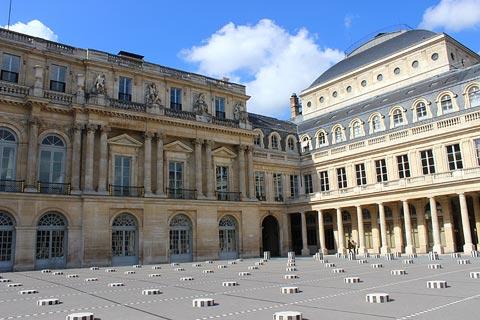 The palace was burned in the Paris Commune uprising of 1870, then restored to be used as Government offices, a role it has retained until today.

Before entering the main courtyard take a look at the original Palais-Royal from Rue Saint-Honorè. This large courtyard is not open to the public but can be seen through the ironwork gates. To the left of the palace entrance is the Comedie Francaise, an important group of actors that was established in the 17th century and is still active today.

You can now enter the courtyard, which falls into two separate sections. The first is a large square surrounded by stone columns called the Cour d'Honneur and now featuring a rather controversial artwork by Danial Buren which has placed black and white striped colums in straight rows throughout the courtyard. It is true that these aren't the most inspiring artwork in the world but you can't blame a city for trying (the pyramid in the Louvre worked rather more effectively) and they give young people somewhere to stand and take selfies...

Just beyond the columns there are large round fountains containing multiple big shiny bowls. Again apparently controversial but these actually give quite interesting multiple reflections of the columns and palace buildings and in my opinion give an extra point of interest.

Beyond this first area the large second courtyard is where you can see the gardens of the Palais-Royal, also surrounded by buildings most of which are now small shops. The gardens were once larger but they were reduced in size and the surrounding buildings erected in 1780 by the Duke of Orléans in an attempt to make money, mostly from cafes and brothels (and rather successfully, we are told). 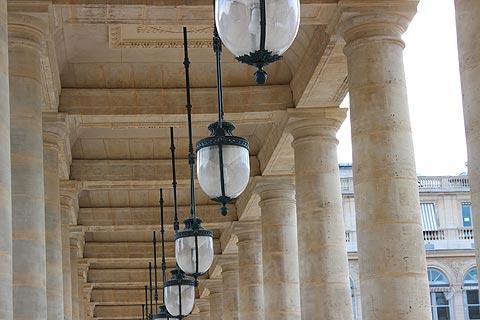 The gardens are very pretty with lots of flower beds and a large water feature in the middle and a nice place to escape the crowds of the Louvre for a while.

We were surprised to see the warning sign next to the pond that so many dangerous chemicals are used to treat the water that it is not safe to even put your feet in the water. I'm no expert but it sounds less than ideal to be using highly toxic chemicals here...

If you leave the Palais-Royal from the north end you can follow the Rue de la Bourse a short distance to see the Bourse (stockmarket) building.

Map of Palais-Royal and places nearby

Visit near Palais-Royal with France This Way reviews