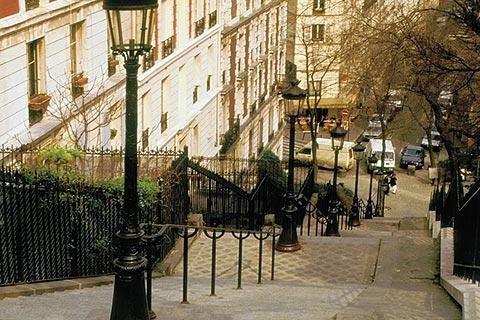 Montmartre is one of the most visited regions of Paris. To the north of Paris the district is set on a hill known locally as 'la butte' and is in the Eighteenth Arrondissement. The name of the region comes from Saint-Denis, the patron saint of France, who was beheaded here - hence 'mountain of the martyr' - Montmartre.

Although Montmartre is slightly away from the main sights of Paris it is still easy to reach either by metro or on foot, and its unique character and village atmosphere make the excursion worthwhile. It owes this character to its bawdy origins of taverns, cabarets and cheap lodgings in the 19th century: although it is now a much more upmarket region that it once was it still manages to retain the ambiance of the days when Delacroix and Van Gogh chose to live here.

The Montmartre streets around the hill are still among the most romantic in Paris (you might have seen them featured in the film Amélie) and the region is now protected to prevent development from damaging its unique character. Particular highlights among the old streets are the Place du Tertre, Place Pigalle (heart of Paris red-light district), Place Emile-Goudeau and the Allée des Brouillards. 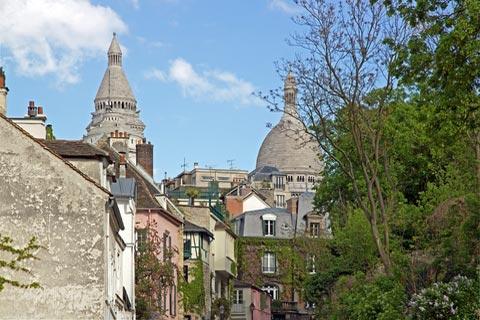 The gardens around the base of the basilica and the Place du Tertre are also a magnet for both tourists and for artists to set up their easels, and for rather a lot of tourist shops. Unfortunately perhaps a great deal of portrait painters are here to please the tourists rather than because of their particular talents, but the lively atmosphere more than compensates for the commercialism!

An interesting sidenote: the Montmartre region was the base for Russian soldiers after the invasion of Paris in 1814, who found the hill well placed to bombard the city. In the restaurant La Mère Catherine in Montmartre they shouted for faster service - since the Russian word for this is 'bistro' the word became introduced to the French language. You can learn more about the long history of the region at the Museum of Old Montmartre just behind the Place du Tertre.

The region has been a popular cultural and centre for nightlife in Paris for more than a century, and has long attracted artists and painters including Picasso, Van Gogh, Degas, Matisse, Delacroix, Berlioz and Toulouse-Lautrec. Because of this artistic heritage Montmartre still has a thriving artistic community with many art galleries and exhibitions to be found here.

The renowned Moulin Rouge cabaret and music hall is also in Montmartre, near the lively centre at Place Pigalle.

The region is most instantly recognisable from afar because of its main landmark, the Basilica of the Sacré Coeur, which was constructed between 1875 and 1914 and has stunning views over the Paris skyline. 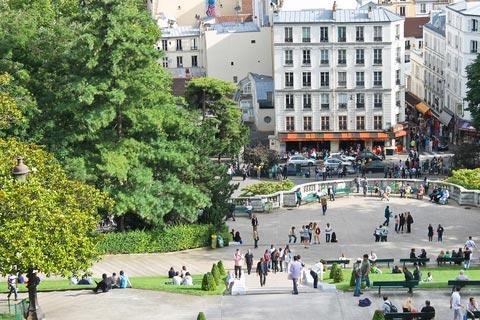 In fact the site has a long religious history, being originally occupied by druids, then later being the site of two Roman temples. From the 12th century the hill was home to buildings connected with the Abbey of Saint-Denis, these being demolished after the French revolution, with the exception of the Church of Saint-Pierre de Montmartre. The Church of Saint-Pierre de Montmartre is also an important 12th century monument - don't neglect to visit to this church just because it is overshadowed by the basilica!

Map of Montmartre and places nearby

Visit near Montmartre with France This Way reviews