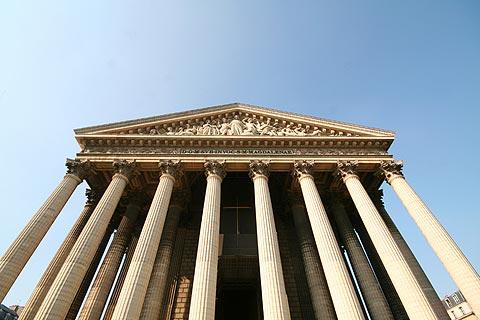 The Church of La Madeleine (Eglise de la Madeleine) is to the north-east of the Place de la Concorde and is one of the most famous landmarks in Paris. The church is notorious for its size and history, and is most remarkable because from the outside it resembles a large Greek temple rather than a church.

During a large part of the year the area around the steps in front of the church are planted with flowers which adds a welcome splash of colour to the rather austere temple facade.

The construction of La Madeleine began in 1764 during the reign of Louis XV. It was designed by the architect Pierre Constant d'Ivry using plans based on the St-Louis-des-Invalides Church.

When d'Ivry died in 1777 his designs, which can be seen in the Musée Carnavalet, were dismissed by his successor, Guillaume-Martin Couture. He decided to raze the unfinished building and start with a new design, this time based on the Panthéon. These designs were also rejected and work stopped between 1790 and 1806.

Napoléon then decided that a Temple of Glory should be built for his Grande Armée and Pierre-Alexandre Vignon was authorised to draw up the plans. After doing away with the remaining efforts from 1790, building started on what was to be a beautiful Greek temple. 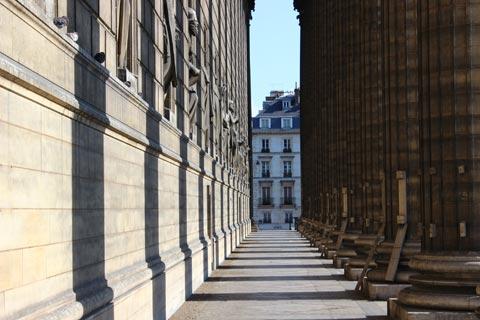 The commemorative role of the edifice was lost when the Arc de Triomphe was completed in 1808, and again the focus of the structure became unknown. In 1814, Louis XVIII confirmed that the Madeleine should be a church, but in 1837 it was almost selected to be the first railway station in Paris. Finally in 1842 it was consecrated as a church.

Modelled on a Greek classical temple, the church is surrounded by 52 columns, each 20 metres tall and in the Corinthian style and fronted by a huge pediment depicting The Last Judgement. At the front, the columns are topped with a sculpted frieze, again typical of the original Greek temples.

Experts will tell you that the building fails in terms of Greek and Roman temple architecture: both the Greeks and the Romans were very precise about the dimensions of their temples and the layout and height of the columns, whereas at the Eglise de la Madeleine they simply used very tall columns and laid them out as they saw fit. This is more of an issue for architectural purists than it is for regular visitors like me!

From the front of the church there is a lovely view all the way along the Rue Royale to the Place de la Concorde.

The exterior leads you to expect a splendid church interior but it is actually rather gloomy and fails to live up to expectations. There are however a couple of notable features and it is free to enter the church so still worth a look...

Inside the Eglise de la Madeleine there is a theatrical stone sculpture of the "Ascension of Sainte Marie Madeline" built in 1837 and showing her being swept up to heaven by two angels. This was executed by Charles Marochetti (1805–67) and draws your eye towards the high altar.

The half-dome above is decorated with a fresco by Jules-Claude Ziegler (1804–1856), a student of Ingres, and entitled The History of Christianity. It commemorates the concordat signed between the church and state after the end of the Revolution, and shows all the key figures in Christendom. The church also boasts a pipe organ built by Cavaillé-Coll in 1846. Nowadays the organ is still used for concerts. The church's interior is otherwise rather plain despite the gilt-edged marble decoration. 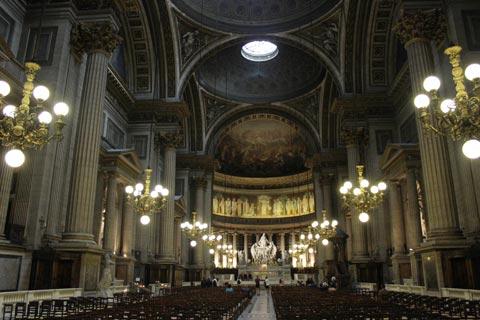 On the east side of the Madeleine church is one of the city's oldest flower markets, dating back to 1832 and open every day except Monday. Also nearby are what must be Paris's most luxurious public toilets, with ceramic walls and wooden doors with stained glass, preserving their original 1905 Art Nouveau décor.

Another attraction in the Place de la Madeleine is the famous "Fauchon" delicatessen shop in the northeast corner, and down the west side you'll find the smaller Hédiard's, for rich gourmets and window-gazers, as well as caviar and truffle specialists.

Map of Eglise de la Madeleine and places nearby