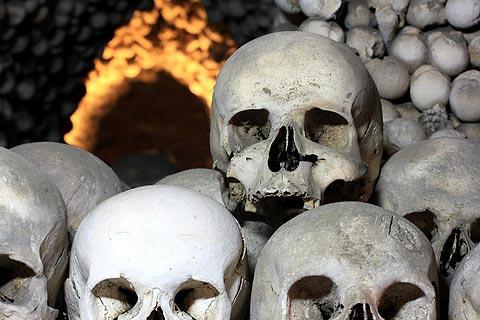 If at some point during your visit to Paris you get tired of the main tourist attractions, the glitz and glamour, and feel a need to visit somewhere more down to earth we have just the place for you - and it's not so much 'down to earth' as 'under the earth'!

The catacombs of Paris - a vast network of tunnels in part lined with millions of skeletons - have now become one of its leading attractions.

The extensive tunnels under the streets of Paris were originally carved out as underground quarries, providing the rock for the construction of many of the buildings in Paris.

It was only later, from about 1787, that the tunnels found a new and more ominous use. The Paris cemeteries were becoming too crowded so to make space for 'new arrivals' the authorities had the idea of removing some of the older remains from the cemeteries. But where to put them? Well, the extensive quarries underneath the city provided the perfect solution and the Paris catacombs came into being. 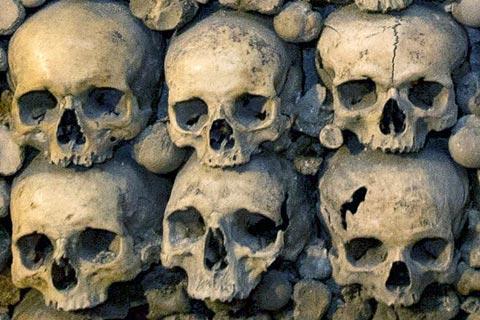 The catacombs became a popular place to stack the bones and in many places they were piled in patterns and artistic designs. A most unusual sight, it is said that the catacombs include the bones of more than six million Parisians.

At about the same time, in the late 18th century, graffiti artists also moved in and started decorating the walls, which you will also see during your visit.

The quarry system itself is much more extensive than the catacombs section. A large amount of the subterranean system is not accessible by the public and is said to include hundreds of kilometres of passages - so next time Paris faces the same problem perhaps the city will once again hear the sound of transport lorries in the middle of the night bringing thousands of skeletons to a new final resting place...

Note: the second solution to the problem of the number of bodies was to create a new cemetery. This was called the Pere Lachaise cemetery, and is now perhaps the most famous cemetery in the world and the final resting place for many famous people from Edith Piaf to Jim Morrison. The cemetery is now, like the Paris catacombs, a tourist attraction in its own right.

The Paris catacombs are at 1, avenue du Colonel Henri Rol-Tanguy - 75014 Paris. Head to the Denfert-Rocherea station on the Paris metro and you will find the (rather discrete) public entrance. They are open every day except Monday, from 10.00-20.00. Entrance costs 10 euros and a visit lasts about one hour.

Note: there are various other entrances scattered across central Paris, some secret and some less so, but you are not permitted to use these for reasons of safety.

You start your visit with a long descent along a staircase and end by climbing another long staircase so a visit is not practical for those with limited mobility. The entrance to the catacombs themselves is marked 'Here is the Empire of the Dead' just to help set the tone for your visit through the passageways, followed by an extensive walk through gloomily lit, slightly damp, tunnels. 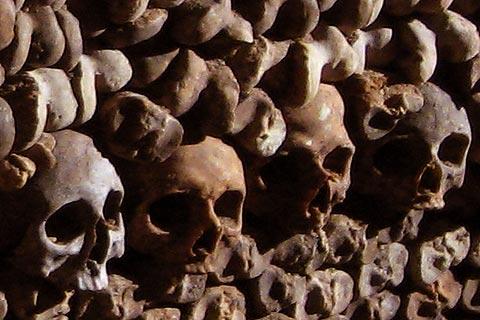 Despite knowing in advance what to expect you will still be startled by the very large number of bones (not complete skeletons) that you will see lining the walls, with skulls peering at you from between the tibias and whole walls and floors of bones and skulls as far as you can see.

Map of Catacombs and places nearby

Visit near Catacombs with France This Way reviews