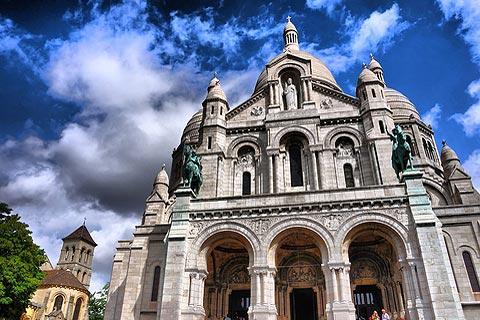 There are many beautiful places to visit in Paris, and one of the most impressive is the Basilique de Sacre Coeur, or Basilica of the Sacred Heart. It sits at the highest point in Paris, on Montmartre Hill to the north of the city, and can be seen from many places including the Eiffel Tower and the Montparnasse Tower.

It is one of the most visited places in Paris, and no wonder – when you reach this place you have a panoramic view of the city both from in front of the basilica and from its dome. An interesting complement to the views you have perhaps already enjoyed from the Eiffel Tower, in our opinion.

Story of the Basilica of the Sacred Heart

At first glance you may think the Basilica is very old because of its style of architecture, but it was actually built in the late 1800’s. Its design is based on the style used in the ancient Romano-Byzantine empire, which you can see more often in the southern regions of France. 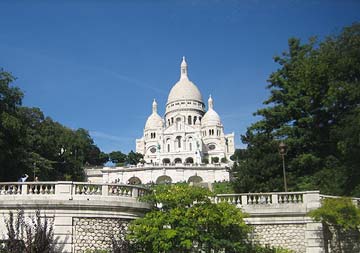 The cathedral was built to honour those who perished during the French Revolution and during the Franco-Prussian war, and to make good for the 'crimes' committed by the Paris Commune. As well as honouring those who died it was also built to inspire faith into the French people who lived on and struggled during what was a very trying era.

Montmartre Hill had long been a place where people came to worship during different periods of history (you will want to visit the 12th century church next to the basilica while you are here) so it was appropriate that the site got chosen for this Christian symbol. It was also said that Jesus Christ appeared to a nun from Montmartre abbey several times towards the end of the 17th century demanding that a church be built here.

Impressively large as it is the basilica was deliberately scaled back to display humility and to challenge the excesses of the Baroque style that had become very popular at the time. Of course, no matter how ‘discrete’ those who constructed the building were trying to be they still managed to include touches that were ornate such as the stained glass windows and one of the largest mosaics in the world, a picture of Christ in the dome above the apse.

The church bell tower is also enormous, in fact it is one of the largest and heaviest in the world weighing 19 tons. However, despite its size the inside of the Basilica de Sacre-Coeur is vast rather than interesting and fails to live up to the expectations you have from the outside.

Visiting the Basilica of the Sacred Heart

If you only have a short time in Paris and are deciding where to visit we highly recommend you include this detour, not so much because of the Basilica of the Sacred Heart itself but to see the amazing views of Paris and of course to explore the rest of the Montmartre region.

Opening hours of the basilica can vary, so always check before you set out (the metro station to get off at is the Pigalle). However, it tends to be open daily and stay open until late evening. You can even have a Sunday Mass here.

Many people choose to visit the Basilica at night. Why? Partly because it is more romantic of course, and the sky over Paris is especially lovely during summer nights. So, you can hold your partner's hand while overlooking an ocean of rooftops dusted in a magic blue light...you get the general idea!

Map of Basilica de Sacre Coeur and places nearby