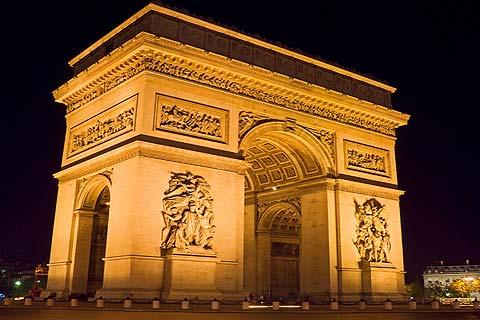 The Arc de Triomphe (Arch of Triumph), in the center of Place Charles de Gaulle in Paris, is one of France’s most famous monuments and listed as a French National Monument. As the world’s second largest triumphal arch, it stands 165 feet (50 meters) high and is an important example of 18th century neo-classicist architecture.

History of the Arc de Triomphe

The arch was designed by the architect Jean François Thérèse Chalgrin, upon commission by Napoleon Bonaparte to commemorate his victory at Austerlitz and honor his army.

Chalgrin’s neoclassical design drew heavily on inspiration from ancient Roman architecture. The construction of the Arc de Triomphe took a long time to finish; the foundations alone took 2 years to build and even by 1810, Napoleon had to have a wooden mock-up built in its place to greet him upon his return to Paris with his bride.

Chagrin died in 1811, and the construction had to be taken over by other architects. After Napoleon’s defeat in 1812 and during the Restoration they stopped construction altogether – hence it’s final completion was not until 1836.

The Arch is now the centre piece in a row of monuments that extends from the center of Paris towards the west, a vista known as the Axe historique. The axis starts at the Louvre to the east and continues to the financial district called La Defense to the west, so the arch is visible from more than three miles away in either direction.

The base pillars of the arch are adorned with four massive sculptures: The Triumph of Napoleon by Cortot; The Departure of the Volunteers in 1792 by Rude; and Peace and Resistance, both by Etex. Engraved on shields adorning the top of the arch are the names of the major victories from the Revolutionary and Napoleonic wars, and the inside of the arch has the names of hundreds of important French generals engraved in it.

Since 1920, the Arch has also been home to the tomb of the Unknown Soldier, commemorating the casualties from World War I and World War II. An eternal flame, the first of its kind, lies at the head of the tomb and is rekindled at 6:30pm every evening.

Although the arch is visible and accessible by foot, the roundabout that surrounds the arch is notoriously difficult to navigate and to cross because of the consistently heavy traffic, however there is a subway that allows access from the Champs-Elysées.

Visitors can then access the top of the Arc de Triomphe to enjoy the extensive views it offers by foot or by elevator. Thes views, along the Champs Elysées to the Louvre pyramid in one direction and to the Arch of la Defense in the other are the principal highlight of a visit.

On Bastille Day, the Arch is the starting point for the parade that goes down the Champs Elysées. The arch also houses a small museum documenting its long history.

Map of Arc de Triomphe and places nearby

Visit near Arc de Triomphe with France This Way reviews