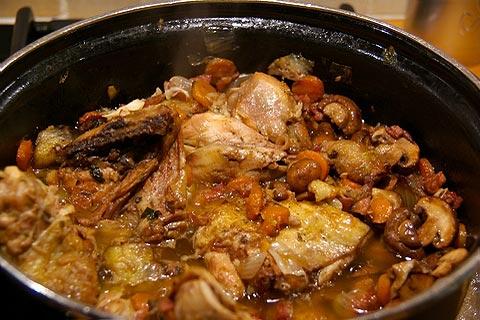 Guest recipe supplied by Peter Chapman at Le Bignon restaurant - please see below the recipe for further information and ways to enjoy more of Peter's cooking for yourself.

One of the all time classic bistro dishes, this is one of those dishes with as many versions as there are grandmothers to make it. However, whichever version you use, the basics remain the same for this richest of dishes.

Using an oven proof casserole, heat a tablespoon of olive oil and a tablespoon of butter over medium heat. Let the butter foam but not burn and then add the onion and carrot and fry for about three minutes until they start to colour. Add the bacon lardons and continue to cook over a medium heat until the bacon begins to brown. Then add the garlic and cook for three or four minutes more. Don’t let the garlic colour, merely melt. Remove the vegetables and bacon from the pan, leaving the fats behind, and keep on one side.

Dry your chicken pieces with kitchen paper, turn up the heat under the pan to get the fats really hot and then add four pieces of chicken, skin side down and fry them WITHOUT MOVING THEM for about four minutes. (If you’re one of these fidgety cooks who likes tossing food about like they do on the telly, the chicken won’t brown!!)

After about four minutes when the chicken pieces are golden, turn them over and cook for about another three minutes, remove from the pan and repeat with your other four pieces of chicken.

Next stage is exciting but can be dangerous! Put all the ingredients back in the casserole and turn the heat down. Have a box of matches ready, tip in the cognac, lean back away from the pan and hold a lighted match quickly a couple of inches over the bubbling liquid. It will ignite! (it’s a good idea to turn off your extractor fan off before doing this - you don’t want to suck the flames into it). When the flames have died down you will be left with essence of cognac without the bitter alcohol.

Season the chicken with a little salt and black pepper and add the red wine (reserving two small glasses) fairly slowly so that a simmer is maintained. Then add the herbs and chicken stock, cover the casserole and transfer to a slow oven. (150˚C works for me).

You want the dish to burp away gently in the oven for about one and a half to two hours, depending on the age of the bird. Keep checking during cooking that the dish isn’t boiling hard in the oven. After one and a half hours check every ten minutes or so to see if the chicken is cooked – take a skewer or small sharp knife and poke the thigh pieces. If the meat is separating from the bone easily, it is ready.

Whilst the coq is cooking, prepare the beurre manie for thickening the sauce. This is merely two teaspoons of butter and two teaspoons of flour mixed together until amalgamated. Keep in the fridge until needed later.

Also at this stage you could prepare the mushrooms. Clean them with a damp cloth, and add them to a mixture of two teaspoons of butter and half a glass of the reserved wine brought to a simmer in a small pan. Season with some salt and black pepper, cover and cook gently for twenty minutes giving the pan a little shake every now and then, draw them off the heat and keep till later..

When you are happy that the chicken is REALLY tender, carefully lift it out of the casserole, cover and keep warm. Strain the sauce into a clean pan, add any liquid from the mushrooms and then boil hard until reduced by two thirds. Taste the sauce for seasoning and then whisk in the beurre manie in small pieces a little at a time until you have the sauce as thick as you like.

Add in the chicken and mushrooms to reheat and serve two pieces of chicken each, surrounded by the mushrooms and ladle the sauce over.

PS you may have noticed that the recipe instructed you to reserve 2 glasses of wine when adding to the chicken and then only used half a glass to cook the mushrooms.

The other one and a half glasses?

Well you did have an hour to spare so what were you drinking then?

This Traditional Coq au Vin recipe was supplied to francethisway by Peter Chapman, chef and joint proprietor of Le Bignon, a restaurant and chambre d'hote in a beautiful manor house in the Pays de la Loire. You can purchase their recipe book with further delicious recipes if you visit their website.