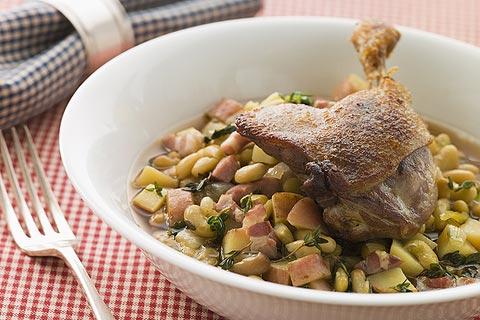 Confit de canard (preserved duck) is another of those things that is often almost impossible to get outside of France, but in France weighs down the supermarket shelves. It is usually bought in tins containing four - six portions of duck, preserved in goose fat. Confit de canard is essentially duck that has been cooked by simmering in oil for a while, then preserved in goose fat.

When we still lived in the UK we would fill the car with tins of confit de canard at the end of our stay, rather than the duty-free wine that everyone else took home. I recommend you do the same.

Someone made the comment that telling you to get your confit out of a tin is not in the spirit of true French cooking (although it would be the reality for most). Unfortunately making your own preserved duck doesn't qualify as quick and easy but for completeness I have added a recipe at the bottom of the page

Getting the confit out of the tin is the only unpleasant part of the exercise, especially if the tin is cold and the goose fat has solidified. If so, leave the tin in a warm place for an hour or two before trying to get it out.

cover the pieces with sea salt and leave somewhere cool for 48 hours;

simmer the pieces in goose fat for 2-3 hours;

put the pieces in preserving jars and pour the goose fat on top to completely cover the pieces.

Sterilise the jars, then use within a couple of months.

(this method for making confit de canard is courtesy Floyd on France, a fine French recipe book unfortunately now out of print. I've never made it myself!)