The French Painter Georges Seurat is the founder of the Neo-Impressionist school of painting. Neo-Impressionism built upon the fundamentals of 19th century Impressionism, focusing on light and its effects on the artist’s perception of colours and shapes, rather than classical representation of form and colour. His paintings are often referred to as ‘dot-paintings’, although the Art Historical term is Pointillism – using tiny dot-like strokes of paint to represent light.

Georges-Pierre Seurat was born in Paris to a wealthy family. He attended the École des Beaux-Arts at the age of 18, and at the age of 23 completed his first large-canvas painting, ‘Bathing at Asinères’, which reflected a still developing method of Pointillism. The rejection motivated Seurat to form with his friends the Society of Independent Artists, where he developed and refined Pointillism.

Pointillism uses tiny dots of primary colours to create the impression of the existence of secondary and intermediate colours, and requires no blending of colours.

In 1884, Seurat began work on ‘Sunday Afternoon on the Island of La Grande Jatte”, which is undoubtedly his most famous work. The ten foot wide painting took almost two years to complete, and reflected Seurat’s ideals. Seurat strived to blend this very scientific method of painting with emotional weight, often citing the way music, though tempo and variation could create harmony and elicit an emotional response.

Seurat had two sons with a young model with whom he lived in secrecy – it was not until right before his death (of an undetermined infection) at the young age of 32 that he revealed to his parents of their existence.

Seurat did not complete many major canvases before his death, but his works are instantly recognizable.

Sunday Afternoon on the Island of La Grande Jatte (1884) – A work that needs to be seen, and is probably the most shown. The essence of Pointillism is encompassed in this painting. 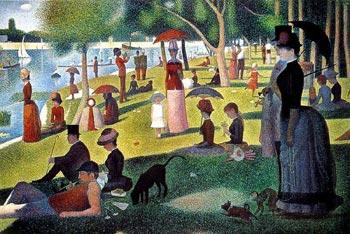 The Models (1887-1888) – Seurat takes his models from ’Sunday Afternoon’ and paints them nude in the studio… standing next to ‘Sunday Afternoon’. Proving that Seurat was not just a master of Pointilist technique, he shows off a smart sense of self-reflection and humor. 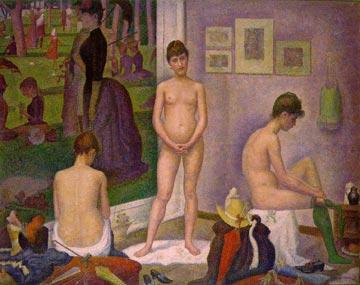 The Circus (1891) – Seurat’s final, and unfinished, work often is the subject of debate. He apparently plagiarized a poster he has seen, and unfinished, its interesting to see – but whether it’s a Mozart’s Requiem or a blueprint for mediocrity is up to the viewer. 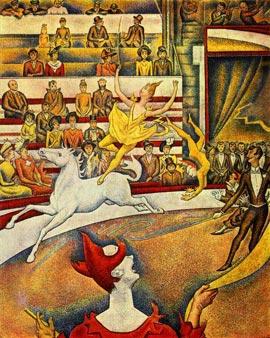