Maurice Ravel was born in Ciboure, south of Biarritz in the south-west corner of France, in 1875. When still young his family moved to Paris, although Ravel was to return to Ciboure in later life. He started piano lessons at the age of seven, and was composing short pieces by the age of 12 or 13. His parents, though not musicians themselves, encouraged his music and he studied at the Paris Conservatory. He was very influenced by Liszt in his piano playing.

As a distraction from his studies Ravel fell in with a group of artists and musicians renowned for 'living it up' called the Apaches. Ravel stayed at the Conservatory for an incredible 14 years, with Fauré as teacher. While at the Conservatory he entered often, but never won, the competition for the Prix de Rome - the last time to bitter controversy.

Ravel was to come to be known as an 'Impressionist' musician, along with Claude Debussy. Yet his music was also extremely structured in form - Stravinsky called him a "Swiss watchmaker".

One of Ravels early works, is the opera Daphnis et Chloé. Three years in the making, and numerous disputes en route about choregraphy and complexity, the opera is now considered to be probably Ravel's masterpiece.

Bolero turned his hand to many piano works, an opera, orchestral music, chamber music and songs in the following years, with the later works becoming more sparse and atonal.

Apart from an interlude during the First World War when Ravel was a truck driver, he continued to compose, and play, mostly around Paris. However in the 1920's he abandoned Paris and the musical establishment, with whom he had never had a close relationship (dating back to a dispute about why he had not won the Prix de Rome in 1915), to return to the French countryside. 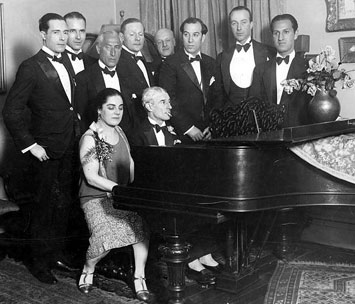 In 1928 he toured America, receiving a standing ovation in New York - the contrast with his earlier receptions in Paris was very marked.

It was also in 1928 that Bolero appeared. Careful rejection of almost all musical principals at that time, it is more or less one tune, with a clearly Spanish influence, repeating over and over with more instruments and volume at each stage. To this day it remains his most enduring and popular work.

The last piece of music I must mention specifically is Pavane pour une infante défunte, a piece of piano music written in 1899 and later orchestrated in 1910. It is the orchestrated version that is more widely played nowadays. It is only quite a short piece of music, but beatifully crafted and lovely to hear.

In the years from 1932, following a car accident leading to poor health, he was much less productive. An operation to improve his health was a failure and he died, in 1937.