Born in Paris, Georges Bizet was a musical child prodigy, and entered the Paris Conservatoire just before his 10th birthday.

In 1857 he won the prestigious Prix de Rome, requiring that he study in Rome for three years. Apart from that period he passed his entire life in Paris. In the period following his return from Rome he wrote several operas, including The Pearl Fishers, and his First Symphony. Apart from being a composer, Bizet was a very great pianist.

But it was with Carmen in 1875 that Bizet's name will go down in history. Georges Bizet might almost (unfairly) be described as having been a 'one-hit-wonder'. But what a hit it was, and continues to be. Carmen is almost certainly the most widely recognised opera in the world, and probably the most popular and the best loved.

This was not the case when first released to poor general reviews, but it received praise from Tchaikovsky and Debussy and other leading lights in the musical world at that time.

The opera Carmen portrays jealousy, passion and sexuality, to a great Spanish flamenco backdrop, and is still a very popular and rousing opera as we enter the 21st century. 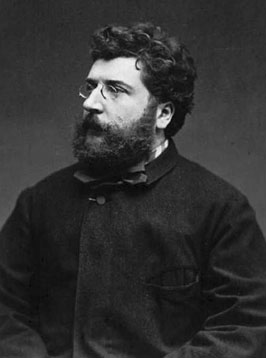 But success with Carmen came too late for Georges Bizet. He died of a long-standing heart condition a few months after its first performance, just 36 years old.