Hector Berlioz was born near Lyons in Isere, France in 1803. His father was a doctor, and he also began medical studies at the command of his father. But he gave these up in 1824 to become a musician, in part motivated to change by witnessing his first dissection.

In 1826 he entered the Conservatoire in Paris as a student. Financial support from his parents was minimal, and he survived by writing, singing and teaching. By this stage he was already composing music. One early influence on Berlioz came when he saw Hamlet, the play by Shakespeare. Not only did the play have a great impact on him, but he also fell wildly in love with Harriet Smithson, who played Ophelia - this passion played a large role in the writing of his Symphonie Fantastique (Fantastic Symphony), which remains to this day one of Berlioz best loved works.

It was not until 1832, some years later, that Berlioz was actually introduced to Harriet Smithson. She was impressed by the music written for her, and they were soon married, although they only stayed together until 1840 and separated completely in 1844. During this time Berlioz was an active composer and journalist. One highlight was the Grande Masse des Morts (Requiem), a large scale work written to have popular appeal, and first performed in 1837. 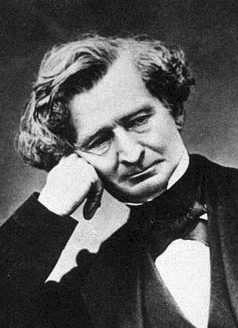 The following years saw a great deal of output from Berlioz, not all completely successful. One success was Roman Carnival, a work for a concert. One interesting note - at the first performance of his Romeo and Juliet, in 1839, a certain young Richard Wagner was sat in the audience being suitably impressed.

His fame was now spreading across Europe, largely following the success of his overtures such as King Lear, and he started to 'take to the road', visiting Germany, Russia, begium and England among others. These European travels continued for several years, during which Berlioz continued to compose new works. One particularly renowned work emerged from this period - La Damnation de Faust - that follows reasonably closely the Goethe Faust story, and is over-flowing with energy and exuberance.

As he became older, Berlioz travelled less, but wrote more - not just about music, but about travel and anything else that sprang to mind. He also wrote an opera, The Trojans. Now considered to be one of his finest works, a curious set of events and the length of the opera meant that the whole opera was not performed as intended until 1957, nearly 100 years after his death. (In a terrible bit of planning in 1879, both parts of the opera were shown simultaneously in different concert halls!)

By the 1860's Berlioz was unwell. Both Harriet Smithson, and his later wife Marie, had died. He conducted some further short tours in Europe, but died in 1869. With music such as the Damnation de Faust he had taken the romantic ideal of music representing nature to a new limit, and his approach to music, at first rejected by French musical society, was now widely accepted. The European face of music had been changed forever.