The French writer Charles Baudelaire is a highly acclaimed poet, critic, and translator whose opinions and writings heavily influenced the direction of the literary and artistic movements during his time. Drawn to human depravity and vice, Baudelaire shocked his contemporaries with his dark and bleak work, though now he is remembered as a master as well as the father of modern criticism.

Baudelaire was born in Paris to a 60-year-old ex-priest father and 26-year-old orphan mother. His father died when he was only six, and his mother then married Jacques Aupick, a soldier who would become a general, an ambassador, and later, a senator. Baudelaire’s relationship wit his stepfather strained as he got older, a relationship that wasn’t helped by Baudelaire’s gravitating toward a literary career.

After graduating from Lycée Louis-le-Grand in Paris in 1839, Baudelaire was enrolled in law school, but instead, he spent his time in the Latin Quarter, nursing his addiction to opium and prostitutes.

Baudelaire was sent away on a voyage to India in order to clean up his life in 1841, but promptly left en-route, returning to Paris in 1842. Upon his return, he met Jeanne Duval, a mixed race woman who became his longest companion. He also received an inheritance from his father, which he promptly squandered half of it over the next two years, trying to live the decadent life of a dandy – it got so bad that his family had to legally regain control of his finances. 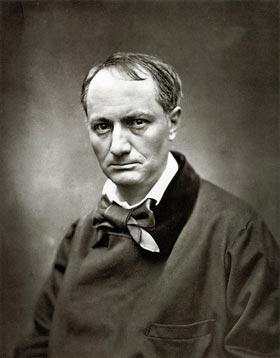 Baudelaire first garnered attention for his writing in 1845 when his art reviews of the Salons were published – his voice was bold and opinionated, and encouraged artists to embrace the “heroism of modern life”. He wrote an autobiographical novel, La Fanfario, in 1847, and spent some time translating the works of Edgar Allen Poe into French. But it wasn’t until 1857 that Baudelaire published his first and ultimately definitive collection of poems Les Fleurs du mal (The Flowers of Evil). Vividly sexual, sinful, and morally depraved, the poems caused quite a stir – so much so that Baudelaire, his publisher, and even the printer were prosecuted.

Although a second printing of Les Fleurs du mal in 1861 offered some redemption, by 1862 things took a turn for the worse. A stroke, excessive drinking, and syphilis he contracted during his time in the Latin Quarter eventually left him paralyzed in a nursing home. He died at the age of 46, his mother by his side.